skip to main | skip to sidebar

I just got done watching Doubt on Netflix. Finally.

A powerful movie and I wonder now if Father Flynn was "guilty," entirely innocent, guilty but of something else... or if this is something that, like the ending of "Lost," is deliberately left not just unanswered but perhaps even unanswerable. 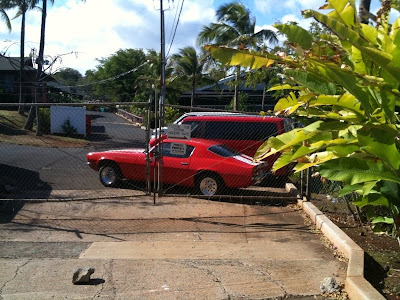 I'm a big fan of "Lost," and I like checking out shooting scenes on the island, but I figured that The Sonagi Consortium was a more suitable place than Monster Island (hmm... that doesn't sound right). Besides, what better way than this to inaugurate my own presence on this hodgepodge blog.
So I happened to take "M" over in the direction of Kapiolani Community College (KCC), which is across the street from the entrance to the crater of Diamond Head. Just Koko Head* side of KCC is the Hawaii Film Studio [photo below, location here], which is the Aloha State's answer to Universal Studios.
This is the facility which is used by filmmakers and television producers to supplement their outdoor shooting in the state. Films like Jurassic Park, Fifty First Dates, South Pacific, etc., and television shows like "Magnum P.I.," "Hawaii Five-O," and my current favorite, "Lost," are filmed here and around the island. You may recall my ephemeral "encounter" with actor Michael Emerson, who plays the self-serving and very creepy Ben Linus, in the big Safeway down on Kapahulu. 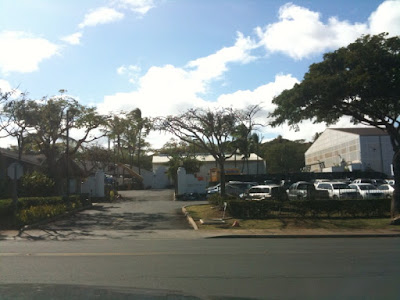 It's small scale by California standards, and a drive around the block can reveal a thing or two. Baby-blue Dharma vans have been spotted on occasion, and when we were approaching the old KCC church (where I used to take taiko drum classes, which is totally kick-ass), we spied a truck of the FedEx/UPS variety (I know my UPS trucks — possibly NSFW link) with the Oceanic Airlines logo. 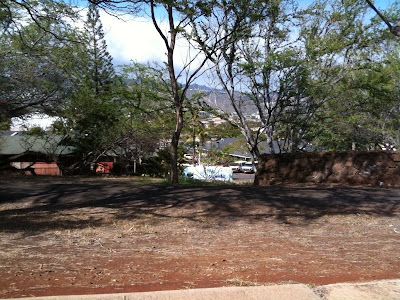 It's a little hard to see there in this iPhone-snapped photo, but it's there (it's much clearer if you happen to be walking by).
Oceanic 815, of course, is the fictitious flight most of the main characters of "Lost" were on when they crashed on the mysterious island, but I don't recall seeing an Oceanic van of any kind, so I wonder if it's something that will pop up in the later season six episodes.
We did have a chance to swing around and drive up to an isolated service entrance just makai* of the main entrance, where we spotted the old car [top photo] that was fixed up by the father (played by famed 1970s stoner comic Cheech Marin) of Hugo "Hurley" Reyes (played by Jorge Garcia — I like this link). That was quite a treat.
"Gitsie Girl" describes one of the episodes in which it appears, and "Lost Virtual Tour" has some scenes showing the car in action, not far from where the Costco is, so maybe I'll check out that street corner sometime. 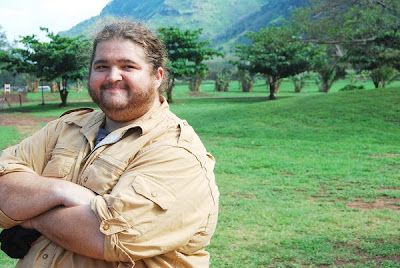 By the way, Jorge Garcia took the Los Angeles Times on a special little tour of the island, showing various "Lost" locations, which I might blog here or at Monster Island (actually a peninsula), supplemented by my own trips to those places. There's a video here.

Garcia's character is one of my favorite on the show — among other functions, he voices things that fans and viewers themselves say about the show — and he himself looks like he'd be a fun guy to hang out with. Since he's saying he'd rather not leave the island (Oahu, that is), I hope I get to run into him at Safeway sometime. It might be less creepy than encounter Ben in the dairy section.
* Directions on Oahu and the rest of Hawaii are frequently given with the words makai (toward the ocean, on the ocean side of some place) or mauka (toward the mountains, or on the mountain side of some place). If you're on the southern side of Oahu, where Honolulu is, then makai is south and mauka is north. East and west are determined by an actual geographic mark as a point: Ewa (pronounced ay-vah) to the west and usually Diamond Head to the east. But if you're east of Diamond Head (e.g., Kahala, Hawaii Kai, KCC, etc.), then Diamond is actually to the south or the west, so at some point Koko Head becomes the eastward reference point.
Posted by kushibo at 4:29 PM No comments: Links to this post

I take a lot of Korean studies courses at my university because they're easy and I like mid-afternoon classes I can roll into after waking up around the crack of noon after some intense weeknight partying. Undergraduate life, you know how we kick it.

Someone had raised the question in class if Koreans had LOLcats. You know, LOLcats. That thing that used to be funny until your aunt started forwarding them to you. Now, I'll admit I don't really have my finger on the pulse of Korean cyberculture. I only just learned that the Korean word for troll is 악플러 (akpŭllŏ). Outside of my Cyworld page, I don't really know what's up.

At first I thought it was funny and turned around going cheeseburger chom chuseyo in a baby voice... then I realized we had something serious happening. I fired up my MacBook Pro and tuned out the lecture so I could concentrate on this: 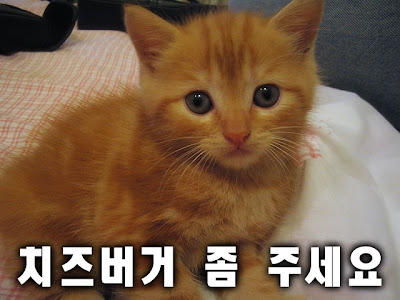 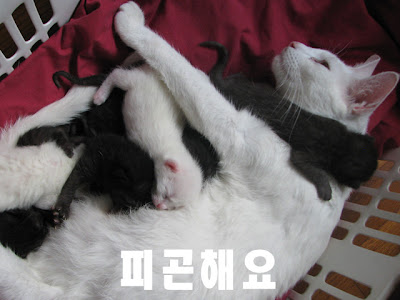 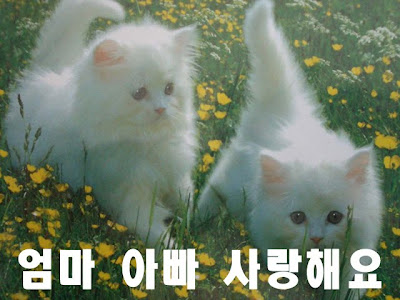 I think it loses something in the translation.
Posted by SUPER EAGLE at 9:28 AM 4 comments: Links to this post

My son is now 6 years old if you count age the way they do in the US of A. When he was first born I was super gung ho to teach him Korean and have him grow up bilingual. When he was a mere 3-months old, we went to Koreatown in New York City where I bought all manner of Koreaspeak language aids: Hangeul puzzles, word books, flash cards, you name it. I put Post-It Notes on everything in the house with both the English and the Korean word for it. I was committed.

At first it seemed to work well enough and it was quite the novelty to have him show off his Korean words for friends and family. It even got to the point where I had to provide his pre-school with a short list of Korean words that he used regularly so the teachers would know what he was talking about.

Sadly, my commitment to my son's bilingualism went the way of Seven Card Stud and the proverbial Sunday drive. I lost motivation, it was hard to keep the Korean up with the amount of English he was learning, and there was nobody else besides me to help. My only Korean friends at the time suggested I put him in their church's Saturday Korean language program. I came up with all kinds of excuses not to do so. My primary reason against it, if you can believe this, was that the church was too far away. Google maps says the distance is 8.6 miles (13.8 KM). Pitiful.

Anyway, what's done is done and my son has forgotten all but a few words of Korean. Of the few Korean words that do remain, you'll most frequently hear him refer to his manpart as his "gochu." (Imagine the confused look on the faces of the other first graders at recess when those thugs Donovan and River are trying to convince my son that it's called a "wiener" and my son insists it's a "gochu.")

My sweet angel of a daughter recently finished potty-training. After a particularly successful visit to the toilet she proudly announced: "Daddy, I went pee-pee on the big potty and wiped my own gochu."

What have I done?
Posted by White Rice at 1:59 AM 7 comments: Links to this post

The New York times today writes about the plight of unemployed Japanese who have come to find that a capsule hotel forms the last barrier between them and homelessness. It discusses, for example, the high rate of poverty experienced in Japan despite the comparatively low unemployment rate of five percent, which is where Canada's unemployment rate sits in good times.

The new goverment of Prime Minister Yukio (625?) Hatoyama has vowed to combat both poverty and homelessness, but meaningful solutions are unlikely without improvement in the economy, which is basically where it was twenty years ago when capsule hotels first came about as the cheapest place to spend a night for businessmen. These days, the local government has gone as far as to allow these hotels to be registered as permanent addresses.

The price is shocking, even for Japan. The hotel featured in the article charges about $640 in rent, a expense that is lessened by the absence of deposits or utility fees. I would question the need to live in Shinjuku and not with family or alone in the suburbs when in such dire straits, but that's another topic entirely.

Speaking of Japan, I have been enjoying these Japanese Mac commercials lately:

If anyone (kushibo?) speaks Japanese, can they let me know if these commercials are as funny in Japanese as it is in English subtitles? Also, I realize that they're quite old, so my apologies if this has already made the rounds of the Internet.
Posted by A Deal Or No Deal at 1:26 PM 1 comment: Links to this post